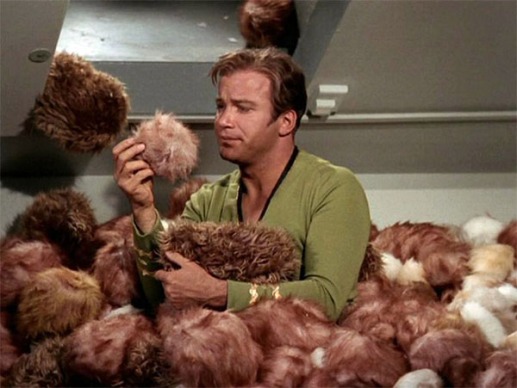 If you are a Star Trek fan, then you will intuitively understand this post. If not, then please bear with us for a quick description.

In the original TV series, ‘Star Trek’, the hero, Captain James T. Kirk found himself in an unusual position.  He was commanded to protect a space station with a vital grain shipment. Captain Kirk had to deal with bureaucrats, an enemy battle cruiser and a merchant peddler who sold furry, purring, hungry little creatures as pets.

Amongst all of the drama of any TV show, was a cleverly written theme throughout the whole episode of the merchant peddler who sold incredibly cute, loveable, furry little creatures. These lovable little pets were continually hungry and seemed to reproduce at will.  In the story, it turns out these loveable little creatures had gotten into the food supply and had multiplied at such an accelerated rate, that the original single Tribble initially brought on board quickly turned into a total number of 1,771,561 (as calculated by the forever enigmatic Mr. Spock).

It turns out near the end of the episode that the Tribbles all died and as a result, the Star Trek officers began to investigate the reasons as to why. It turns out that they were all poisoned with a virus in some infected grain that was placed there through a nefarious plot by the enemy. The enemy planned to destroy the vital food supply. The comment by the ship’s Chief Medical Officer, Dr. McCoy, is the focus of this post.  After discovering that the precious little Tribbles were all poisoned by the enemy, he said:

Apparently, the enemy had cleverly slipped in among them disguised as a trustworthy individual and executed his plot.

What does this have to do with the Word of God and the things of God?  We’re glad you asked!  In light of Dr. McCoy’s statement, how often do we see this in the House of God?  How often do we see precious Christians that are loveable and have grown fat on the bread/grain that they have been fed?  They are content to eat the Bread handed out to them by the leaders; multiply while not causing any harm to anyone and go about their existence simply taking up space.  They provide love and are cuddly but innocently, have no function. They are content to consume and exist while not doing anything to help.

The enemy, in the meanwhile, comes along with his nefarious plans and secretly works to poison their food supply.  The enemy seeks poison young Christian’s food supply so that they are constantly eating but cannot absorb the spiritual food.  The minister shares the Word of God, but yet the Saint is unable to internalize what they have been taught.

It is interesting to note that the tactics that the enemies of God’s Church often operate in the same manner as the enemy on that TV show.  Those who are under his influence operate under demonic deception and guile to slip in among saints and attempt to poison their food supply. They pretend to be one thing but in actuality, another.

It is also interesting to note that the food supply was poisoned with a virus that rendered the food inert. It turned the food into that of which had ‘no value.’ The enemy’s main goal is to take the precious Word of God that is shared by anointed men and women of God and render it inert.  He doesn’t care if you go to church and get fed, he wants the Word of God to have ‘No Value’ in your life.

We must keep the food supply pure. The Word of God preached must remain clean, pure and healthy for all those who would receive it.  It must not be tainted with man’s traditions, puffery or theatrics. When the Word of God is laced with men’s traditions, puffery, and theatrics, it is consumed, but nothing can be absorbed that is of nutritional value.  There are Christians that are starving to death spiritually even though they are eating regularly. The enemy has slipped and contaminated the food supply.

Also, the enemy wants to give you the virus of ‘Negativity, Fear, Doubt, and Unbelief’ so that the Bread of Life becomes inert. The virus will cause anything that has nutritional value to lose it value or turn it into something that cannot be absorbed.

“Now I beseech you, brethren, mark them which cause divisions and offences contrary to the doctrine which ye have learned; and avoid them. For they that are such serve not our Lord Jesus Christ, but their own belly; and by good words and fair speeches deceive the hearts of the simple.”  – Rom 16:17-18 KJV

Maintaining traditional ways of doing things when the Lord is instructing His people to do things differently also renders the Word of God inert in their lives.  The Pharisees in the times of Jesus were a religious group that operated in much negativity, fear, doubt unbelief, criticism, accusation and treachery. They are just like some religious people today that are in today’s churches who profess to know Jesus as Lord but yet operate as disguised operatives of the enemy.  The following account tells of the Pharisees  who questioned Jesus attempting to trap in His own words concerning the ambiguity of the following of tradition but not according to manners:

“Then the Pharisees and scribes asked him, Why walk not thy disciples according to the tradition of the elders, but eat bread with unwashen hands? “-Mar 7:5 KJV

“He answered and said unto them, Well hath Esaias prophesied of you hypocrites, as it is written, This people honoureth me with their lips, but their heart is far from me.

Howbeit in vain do they worship me, teaching for doctrines the commandments of men.

For laying aside the commandment of God, ye hold the tradition of men, as the washing of pots and cups: and many other such like things ye do.

And he said unto them, Full well ye reject the commandment of God, that ye may keep your own tradition. “  -Mar 7:6-9 KJV

Like the enemy agents in the TV show, they slipped in disguised as ‘proper’ Christians while attempting to render Jesus and His Word inert. They were concerned about the spreading of the physical ‘dirt /germs’ from not washing their hands when the real contagion was their attitudes and mindsets.

Just like dealing with a physical virus, we must take precautions, wash our hands and use wisdom to inoculate ourselves so as not to receive the flu or any other contagious disease from those who are infected.  We must renew our minds and wash ourselves with the water of the Word (Rom 2:12 & Eph 5:26) We must inoculate ourselves and remain immunized through consistent prayer. (1 Th 5:17)  We keep our strength built up by making sure that we eat God’s Word daily. (John 6:35) We must make sure that the sources that we eat from are clean and pure. (James 3:17) We need to receive the spiritual shots of Love, Grace, and Mercy from the Lord so that we can remain healthy.

Just like any hospital, where there may be infected people, a church and its leaders must use wisdom to minister to those who carry such diseases and not become infected themselves.  Love, kindness, and graciousness go a long way to provide a salve that is needed to heal the infected.  Discernment, wisdom, and understanding help to prescribe the necessary healing regimen.

As ministers, we are, in actuality, doctors providing for the spiritual care, healing, and well-being of the saints.  As a people, we are following the Lord to the best of our ability.  As Star Trek fans, we are amused by certain TV shows just like anyone else.

As for the Tribbles, they are probably floating around in space somewhere. 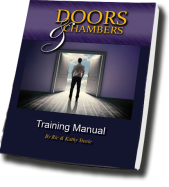