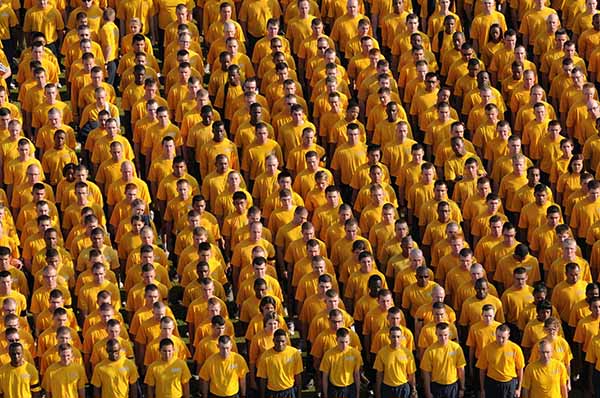 A tongue-in-cheek perspective (but serious though) of some of the kinds of people found in the New Testament.

As we learned in the previous blogs, the tag ‘ites’ is a Christian colloquialism used to describe certain races of people in the Old Testament that originate from a certain area. In Hebrew, the term ‘ites’ means “people of”.  And as we mentioned before, that the ‘ites’ of the Old Testament such as the Ammonites, the Amorites, the Canaanites, and the Girgashites and etc all had certain qualities, attitudes, and attributes associated with them.

Previously, we learned of the Getites and the Doerites. Today, we learn of a third ‘ite’.  Again, we go to the book of John chapter 6 and we see the same story of Jesus multiplying the loaves and the fishes. The Bible tells us how Jesus turned the 5 Barley loaves of bread and 2 small fish into enough food to miraculously feed 5000 men with plenty left over. The fragments that were left over were enough to fill 12 baskets.

We encourage you to take the time and read the entire story. If you do, you will discover that there are some interesting things that occurred. As Jesus was about to perform the miracle, He gave some instructions to His disciples:

“And Jesus said, Make the men sit down. Now there was much grass in the place. So the men sat down, in number about five thousand.” –   -Joh 6:10 KJV

Another version of the story is recorded in Luke, chapter 9. That version tells the story like this:

“For they were about five thousand men. And he said to his disciples, Make them sit down by fifties in a company. And they did so, and made them all sit down.” – Luk 9:14-15 KJV

When we study the Bible, it is not enough to simply read it as a novel.  It is not a novel or simply a collection of historical stories. Rather, it is alive. It is the very breath of God. God is perfect and so is His Word.  Every scripture and every word is important. One should take the time to consider the order of things. One should take the time to consider the exact wording. That is why understanding which version of the Bible you are reading is important.

We have heard it argued that the Bible is full of conflicts. However, those kinds of statements only tell us that the person opining that argument has not studied or delved deeply enough into the Word of God led by His Spirit.  When one is led by His Holy Spirit, there are scriptures that initially appear not to have any relationship to each other but, as you study deeply, not only is the relationship revealed but deeper Truths are also understood.

With that being said, as we look at the scriptures John 6:10 and Luke 9:14, we can’t help but notice that it immediately proceeds the miracle of Jesus multiplying of the bread and fish in John 6:11:

“And Jesus took the loaves; and when he had given thanks, he distributed to the disciples, and the disciples to them that were set down; and likewise of the fishes as much as they would.” – Joh 6:11  KJV

“Then he took the five loaves and the two fishes, and looking up to heaven, he blessed them, and brake, and gave to the disciples to set before the multitude. And they did eat, and were all filled: and there was taken up of fragments that remained to them twelve baskets.“ – Luk 9:16-17 KJV

From these scriptures, we can see that the men were ordered to sit down FIRST.  They were made to sit down BEFORE they could receive their miracle. Jesus put a priority on the process of the men to sit down. He also put a priority on the fact that they were to sit in groups of 50. There was organization, arrangement and definition woven into that command. As the order was established, the disciples could proceed with the distribution of the bread and fish.  However, there is something that happened to people’s thought processes as they sat down.  Their thought process changed from ‘Hope’ and ‘Wondering’ to ‘Anticipation’ and ‘Expectation’.

Prior to the miracle, the men were ‘hoping’ to receive a meal. As they sat down, there became an anticipation and expectation that it would actually arrive. Anyone who has ever gone to an extremely popular restaurant instinctively understands this concept.   There is a restaurant located in the Dallas, TX area that people line up for BEFORE it opens! We have gone there after it had opened and have seen the line going all the way down the block and around the corner.  The people standing in the back of the line were ‘hoping’ to get in and get a seat.

However, there is a thought process that happens once you get in and have placed your order.  They tell you to have a seat and your food will be available shortly.  Mindsets begin to change from hope to expectation.  With that expectation comes a new level of patience as one quietly waits to be served. Having gone to this restaurant multiple times, we understand the wait times and we patiently endure the process. We understand and therefore have a greater tolerance to stand in line while our stomachs are growling (quite loudly we might add). Sometimes, it really felt like we were suffering an indignity. In subsequent conversations, we have found ourselves laughing and bragging about standing there and waiting while hungry. We also discovered that we developed a confidence over time that we will actually get in and be able to successfully place our orders.  While that is a natural event, there is a similarity in the Spirit of God.  On a spiritual level concerning spiritual things, the Bible says it like this:

“Through Christ we can approach God and stand in his favor. So we brag because of our confidence that we will receive glory from God. But that’s not all. We also brag when we are suffering. We know that suffering creates endurance, endurance creates character, and character creates confidence. “ – Rom 5:2-4 GW

When the 5000 men sat down, their ‘hope’ changed to ‘expectation’. They learned to rest and wait for God’s promise to be fulfilled. They developed a type of endurance waiting for the food to be distributed. They began to develop more confidence in the fact that Jesus would truly provide for their needs.

Thus, we would like to formally introduce you to the next “Ites”…

The Sittites are those who have learned to “Sit Tight” in agreement with others of like faith waiting on the promises of God.

As a final note, here is the funny thing about getting something good to eat. Afterwards, you feel energized and you have better feelings towards life in general.  Turn your hope into expectation and learn to wait patiently upon the Lord.  Let Him feed you the Bread of Life. And as you do, you find yourself invigorated, strengthened, and renewed.  Isaiah says it like this,

“But they that wait upon the LORD shall renew their strength; they shall mount up with wings as eagles; they shall run, and not be weary; and they shall walk, and not faint.” – Isa 40:31 KJV

Don’t just stand in faith. Learn to wait in expectation. Let the Lord feed you and renew your strength.

Get your copy of Doors & Chambers, the book by Apostle Ric Steele today!  Get yours now! Go to et My Copy Now!

Get it at Apple, Google Play, Windows & Amazon stores

One thought on “The “Ites” of the New Testament – Part 3”