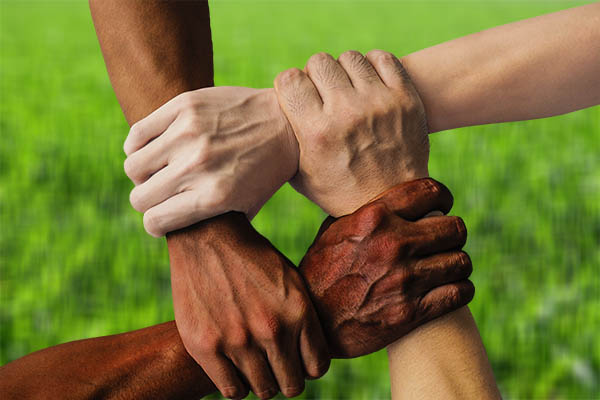 Have you ever played on a sports team or followed on intently? Have you ever acted in a play?   Have you ever worked for any organization?  Perhaps you have even played in a band. You may have fought in a war. Perhaps you are or have been married.   If you answered ‘yes’ to any of these, then you know the importance of teamwork.

We are all familiar with the teamwork clichés and general expressions that have been tossed around. You’ve probably even heard many of the inspirational and motivational clichés.  You may have even heard some very recently.  You’ve probably been told that together you’ll go further, be stron­ger, accomplish more, and be more successful. And all of these are true!

However, here is something to consider… Teamwork was ordained and established first by God as a pattern for success.

In the initial scriptures concerning the creation of man in the Bible, God makes the statement, “That it’s not good for a man to be alone.”   He further makes a declaration that He will make a help meet for him.

Without getting into the conversation about spouses, we can quickly see that it is not good for man to be by himself. In one fell swoop, the Lord created a wife, created the institution of marriage and established the concept of teamwork as the foundation of society.

The Bible very clearly describes the importance of teamwork in Ecclesiastes 4:9-12

“Two are better than one, because they have a good reward for their toil. For if they fall, one will lift up his fellow. But woe to him who is alone when he falls and has not another to lift him up! Again, if two lie together, they keep warm, but how can one keep warm alone? And though a man might prevail against one who is alone, two will with­stand him—a threefold cord is not quickly broken.”

Here is something that may surprise you. The Lord, when He created a wife for Adam, instituted marriage and established teamwork as the framework of society, did not create something new!

What?? Did I read that correctly??  Yes, you did.  A Help Meet, Marriage and Teamwork were not novel concepts.  Let’s first define the concepts and then we will explain.

With that being said, let us go back to the statement that was made prior.

When The Lord created a wife for Adam, instituted marriage and established teamwork as the framework of society, He did not create something new. Yes, Adam and Eve were new, but the concepts were not new.

How can that be said?  Easy! The Lord duplicated the relationship of the Trinity. The Father, The Son and The Holy Spirit.  He gave us the ultimate pure pattern for success straight from Heaven itself.

The Holy Spirit is a help meet.  Jesus said it like this:

“But the Helper, the Holy Spirit, whom the Father will send in My name, He will teach you all things, and bring to your remembrance all things that I said to you. “ – John 14:26

So as not to sound diminishing or to dishonor God in any manner, the first example we see of  the strategy of ‘Teamwork’ in the Bible was copied.

This statement can be made because there is nothing greater than God. There can be no greater example of teamwork than how the Trinity operates in Heaven.  No greater example, technique or strategy could be used as an example to establish the successful pattern of teamwork for man than what has already been used in Heaven by God!